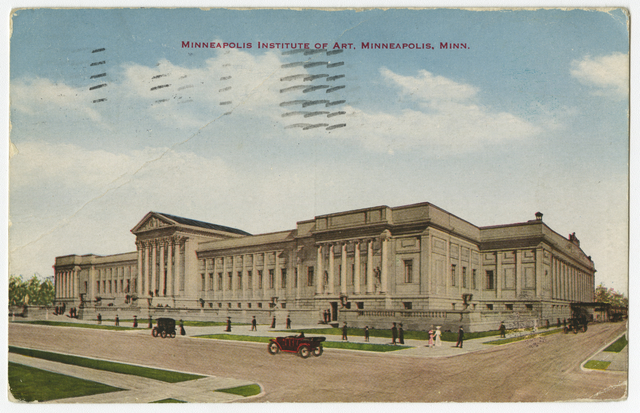 When the Minneapolis Institute of Art opened it displayed 450 works of art. Today his collection includes more than 89,000 objects

When the Minneapolis Institute of Art (Mia) opened in 1915, it displayed 450 works of art, most of them on loan. In the 21st century it is an encyclopedic art museum with a collection of more than 89,000 objects from 20,000 years and six continents; Special exhibitions on topics from Star Wars to Martin Luther; and a community presence that reflects more than a century of local support for the arts.

Mia was an outgrowth of the Minneapolis Society of Fine Arts (MSFA), which was founded in 1883 and maintained a small gallery on the top floor of the Minneapolis Public Library. At an MSFA dinner on January 10, 1911, financier DeWitt Clinton Morrison announced that he would donate ten acres to allow society to build a museum, provided they could raise $ 500,000 for the building. MFSA President William Dunwoody immediately pledged $ 100,000, and delusional promises ensued. Within ninety minutes, dinner guests had pledged an additional $ 250,000. The rest of the money was raised within the month.

The Minneapolis Institute of Arts (“Arts” contained a final “s” until 2015) opened January 8, 1915 in a neoclassical building designed by the New York firm McKim, Mead and White. A pillared portico gave access to East Twenty-Fourth Street. Accessibility was an important value: the museum offered free entry and free wheelchairs three days a week. The number of visitors in the first year exceeded almost 148,000.

As befits an institution that opened in Minnesota that winter, support for the new museum grew. Dunwoody, who died in 1914, left a million dollars in his will. Morrison’s daughter Ethel Van Derlip left the museum for $ 500,000 in 1921; businessman James Ford Bell began donating American silver in 1932; and the flour magnate Alfred F. Pillsbury bequeathed his entire Asian collection in 1950. At the turn of the 21st century, Target Corporation and Bruce and Ruth Dayton were major donors.

Mia immediately started building her collection. In addition to donations, the most important acquisitions included an intact Egyptian mummy and a coffin box (1916); Rembrandt’s Lucretia (1934); and in 1992 the Jade Mountain, at 640 pounds the largest piece of imperial carved jade outside of China. In 1998, Mia opened 22 Asian art galleries, including a complete 17th century (Ming Dynasty) lobby. It was bought in China, then dismantled piece by piece – from the floor tiles to the carved wooden ceiling – before being boxed, shipped, and reassembled at the museum. The room and the scholar’s room, which Mia acquired at the same time, present the museum’s outstanding collection of Chinese furniture and form the heart of an Asian art collection that is one of the best in the country.

With the expansion of Mia’s collections, the physical space has also expanded. In 1927 an auditorium, galleries and offices were added. A big change came in 1974 when the MSFA realized its goal of creating a unified space for its three sub-organizations: the Children’s Theater Company, the Minneapolis College of Art and Design and Mia. The project, designed by Japanese architect Kenzō Tange, involved a complete renovation of Mia’s existing building and two new wings, doubling Mia’s exhibition and educational space. The new design also linked the museum directly to the Children’s Theater Company with a shared entrance on Third Avenue South.

In 1998 more galleries were added. In 2006 the museum opened its largest expansion to date, the Target Wing designed by Michael Graves. This added 40 percent more exhibition space, especially for modern and non-Western art.

The Target Wing also increased the space for the Minnesota Artists Exhibition Program (MAEP), an artist-run curatorial division, by 80 percent. The program includes several exhibitions each year of works by Minnesota artists and represents a unique partnership between a museum and its local artist community.

Accessibility has remained a cornerstone of Mia’s mission. In 1989, the museum lowered its entry fee (then $ 2) for all but temporary exhibitions. In addition to MAEP, Mia has presented exhibitions by local Hmong, Somali and Native American artists. Blockbuster exhibitions attract huge crowds. An exhibition of underwater finds from ancient Egypt 2018-2019 drew 154,000 visitors. The total number of visitors to the museum reached almost 780,000 in the 2019 financial year.

Mia’s collection continues to grow in the 21st century with the most recent loans and bequests from Myron Kunin and Mary Griggs Burke, both in 2015.

More information on this topic can be found at the original entry on MNopedia.