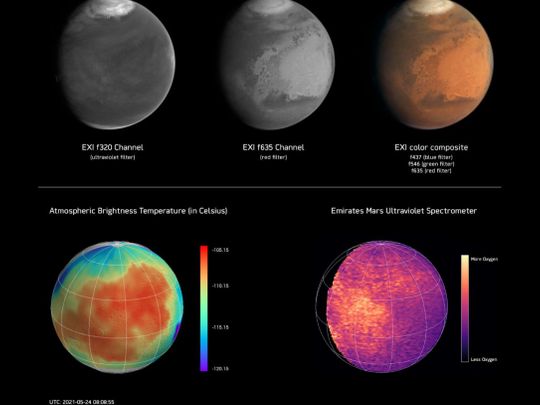 Dubai: July 20th – In the early hours of this day last year, the United Arab Emirates’ dream of reaching for the stars came true. Hope Probe, the first Arab interplanetary mission, was successfully launched on July 20, 2020 at 1.58 a.m. (UAE time) from the Tanegashima Space Center (TNSC) in Kagoshima Prefecture in southwestern Japan.

A year has passed and Hope Probe is currently orbiting the Red Planet to get a full picture of the Martian atmosphere. “The mission has not only performed nominally in all areas, it has exceeded its expected performance, includes a number of additional activities and frees up valuable resources to conduct additional observations,” said the Emirates Mars Mission (EMM) on the eve of its first anniversary.

‘From strength to strength’

EMM project manager Omran Sharaf said on Monday: “In addition to our planned parameters, we had quite a bit of leeway and, to be honest, our trust in our spacecraft has grown stronger and stronger. We were able to reduce the number of flight path correction maneuvers, carry out additional observations during our flight to Mars and have now expanded the mission to include a whole range of scientific studies that I can only call a “bonus”. It was indeed a very busy year for Hope Probe. “

“A day full of pride”

Recalling the historic moment, Sharaf said in a previous interview with Gulf News, “It was a day of pride, happiness and positivity. Yes, it was a very busy, intense and stressful day; But personally I was convinced of the teamwork and the spacecraft design. “

Hope Probe has traveled 493 million kilometers to reach the Red Planet. The original seven flight path correction maneuvers (TCMs) have been shortened to four due to the spacecraft’s outstanding performance during launch and early operational phases (LEOPs). This saved resources and allowed the EMM team to conduct a series of observations en route to Mars.

Then came the most critical part of the mission – the Mars Orbit Insertion (MOI). Concerned, scared, but confident – it was definitely a mixed feeling for Sharaf and his team who have reached this point – the furthest any Arab would ever reach in the universe. They only had one chance and with a success rate of only 50 percent – it could go either way: failure or performance.

On February 9, the Hope probe entered orbit around Mars. Sharaf told Gulf News, “When we arrived, the stress was gone. The feeling was very difficult to describe. For the first few minutes I was still shocked. The last seven years (from the Hope Probe announcement in 2014) passed really quickly before me. It took me a while to realize our achievement and it felt good. Now the stress is still high, but the stress level is significantly lower. “

Members of the EMM then worked to calibrate Hope Probe’s scientific instruments to ensure that Mars’ atmospheric data collected was accurate as it entered science orbit.

EMM’s Emirates Mars Ultraviolet Spectrometer (EMUS) instrument was activated and used to image Mars’ exospheric hydrogen during Hope’s journey to Mars. The instrument was also cross-calibrated with the PHEBUS spectrometer on board the European Space Agency’s BepiColombo spacecraft en route to Mercury. “These experiments were just possible because Mars Hope was in such good shape,” recalls Hessa Al Matroushi, EMM’s director of science.

As resources became available and the spacecraft’s performance exceeded planning scenarios, the dust tracking feature of Mars Hope’s star tracking instruments was also activated, which allows measurements of interplanetary dust in the wake of Mars as it revolves around the Sun.

EMM has repeatedly answered the question – why study the red planet. It replied, “Mars has captured the human imagination for centuries. Now we have come to a crossroads where we know a lot about the planet and have the vision and technology to explore further. Mars is an obvious target for exploration for many reasons. From our quest to find extraterrestrial life to one day expand human civilization to other planets, Mars serves as a long-term collaborative project for all of humanity. ”
As Mars’ first weather satellite, Hope (Al Amal in Arabic) is the first probe to provide a complete picture of the Martian atmosphere. It will help answer important questions about the global Martian atmosphere and the loss of hydrogen and oxygen gases into space within a Martian year.
In particular, Hope Probe will help people “understand climate dynamics and the global weather map by characterizing the lower atmosphere of Mars; Explain how weather alters the escape of hydrogen and oxygen by correlating the conditions of the lower atmosphere with the upper atmosphere; and understand the structure and variability of hydrogen and oxygen in the upper atmosphere and identify why Mars is losing them to space. ”

The Hope probe has moved onto its unique elliptical science orbit from 20,000 to 43,000 km with an inclination of 25 degrees to Mars. In this orbit, the Red Planet orbits every 55 hours to collect a full sample of planets every four orbits, or nine days on Mars.

The Hope probe’s three instruments were activated on April 10th, followed by a phase of commissioning and testing before the mission’s science phase officially began on May 23rd, electrifying the global Martian science community with the first global images of the discrete aurora borealis Mars published in the far ultraviolet and provided new insights into the phenomenon of the discrete polar lights in the night atmosphere of Mars.

The magicians of a ghostly glow known as Mars’ Discrete Aurora, recorded by Hope Probe’s EMUS instrument, were released by the Emirates Mars Mission (EMM) on June 30th. His Highness Sheikh Mohammed bin Rashid Al Maktoum, Vice President and Prime Minister of the United Arab Emirates and Ruler of Dubai, also tweeted about the Mars phenomenon and said: “The UAE Hope probe, the first Arab interplanetary mission, has the first global images of the discrete Aurora of Mars recorded. The high quality images open up unprecedented potential for the global scientific community to study solar interactions with Mars. “

According to EMM, the images captured by Hope Probe have “revolutionary effects on our understanding of the interactions between solar radiation, Mars magnetic fields and the planet’s atmosphere”.

Al Matroushi noted, “These unique global snapshots of the discrete aurora of Mars are the first time such detailed and clear observations have been made worldwide, and over previously unobservable wavelengths. The implications for our understanding of the atmospheric and magnetospheric science of Mars are enormous and provide new support for the theory that solar storms are not necessary to power the northern lights of Mars. “

Justin Deighan, EMM’s Assistant Director of Science, added, “We completely ruined the ten-year study of the northern lights of Mars with ten-minute observations. The data we are collecting confirms the enormous potential we now have to explore the aurora borealis of Mars and the interactions between the magnetic fields of Mars, the atmosphere and the sun’s particles with a range and sensitivity that we have only dreamed of could. These exciting observations go well beyond the original scientific goals of Hope Probe. “

Hope Probe is on a two year mission to map the atmospheric dynamics of Mars. According to EMM, after a validation and review phase, the first scientific data from the mission will be released worldwide without embargo in October 2021 as engineers from the Emirates have worked with partners around the world to increase the design, engineering and manufacturing capabilities of the UAE develop, ”noted EMM.

Hope Probe’s historic trip to the Red Planet coincides with a year of UAE Golden Jubilee celebrations. According to EMM, “Beyond Hope Probe’s scientific goals are its strategic goals, which revolve around human knowledge, Emirati capabilities and global collaboration.”

The mission will go beyond data and results. It will improve the quality of life on earth by pushing our boundaries to make new discoveries; Promoting global collaboration in the exploration of Mars; Demonstrate leadership in space exploration; Building the capabilities of the Emirates in the field of interplanetary exploration; Promotion of scientific knowledge, because a sustainable, future-oriented economy is a knowledge-based economy; inspire future Arab generations to devote themselves to space exploration; and establish the UAE’s position as a beacon of progress in the region.

AFA announces the National Teacher of the Year 2021